Understanding the requirement to uphold freedom of expression, the European Court of Human Rights, in 1979, noted the media should have not just the right, but also the duty, to discuss matters of general public interest. And this was advice given, notwithstanding that civil litigation may be pending before the courts.

Criminal cases are heard in front of a jury and media are normally asked to refrain from reporting sub judice matters so as not to influence any jury.  However civil proceedings are normally heard by a Judge, who it is automatically assumed, cannot not be swayed by public or press opinions and thus the normal rules of sub judice do not apply.

As Robert's main case confronts human rights abuses, there is no question that it is of public interest given the politically exposed persons who are involved. Therefore, in these pages and documents, the aim is to outline the merits of the cases, the essential points and questions which are at issue, but not the detail of the ongoing civil proceedings. Documents that are already in the public domain are also being shown on this website.

This case is undoubtedly of public interest, both nationally and internationally, given what is now unfolding in Malta about perceived corruption at the highest levels and the lack of independence in some of Malta's media.  In particular, it should be noted that when Robert met with the Editors of The Times of Malta  they told him directly that they did not consider this story to be of any public interest, so its readers are being denied the actual facts, unless they read other publications as well. Another newspaper, Malta Today, did choose to report some of the case proceedings as well as some other Maltese speaking newspapers.

This website sets out the basic facts of the situation concerning the two court cases Robert has filed in Malta.

The first case stems from the conflict of interest that the original executors had from the outset which resulted in their self serving of assets to The Strickland Foundation that properly belonged to the heir through their own self serving interpretation of Mabel's will.  The executors also ensured that, if challenged by the heir, then the heir could have no part in the running of The Strickland Foundation despite it being set up by Mabel "for herself and her heirs in perpetuity".

The assets in question include:-

1. Land and buildings in the village of Lija which have never formed part of the property bequeathed to the Foundation, i.e. "the property known as Villa Parisio"

2. All Strickland family collections and heritage items and the family's administration, legal and historical files which were contained within the Villa at the time of Mabel's death and which do not form any part of the bequest to the Foundation and
3. The heir's sole right to live in the Villa and the extent of these rights.


The second case relates to:


After decades of Robert trying to negotiate an amicable resolution to the allocation of Mabel Strickland's estate by the executors, no agreement was reached, and so a court case was filed, by Robert, in January 2010, very reluctantly, to get the Court's verdict on the executors' interpretation of Mabel's will.

Robert is challenging the executors' interpretation of his aunt's will, where he believes that the executors gave assets to The Strickland Foundation which properly belong to him, as heir. He contends they have been trampling on his real right of use and habitation at Villa Parsio, Mabel's erstwhile home in Malta. One of the problems which has held up this case, from the outset, is the persistent refusal of the executors and The Strickland Foundation to pass over, to Robert, all of his Aunt's legal and administration files which, under Maltese law, belong to him and are needed, by him, to properly administer the assets from her estate. These files would also have helped clarify Mabel's intentions regarding the revised will and the setting up of The Strickland Foundation during the 1979 'troubles'. The defendants have consistently refused to pass all of these files over, making the court case inevitable, as, in refusing to do so, they offer Robert no equality of arms and certainly no transparency.

In addition, rather than acting in a bonus paterfamilias manner, in conjunction with Mabel's heir, the executors and The Strickland Foundation embarked on a campaign of harassment against her heir and then his family, after she died. This campaign was intensified, in 2010, immediately after Robert filed his first court case. At the request of the Judge, the case was paused for a mediation attempt, which took two long years. During this time the harassment abated at the request of the Mediator. Robert and his family are still subject to harassment which appears to be aimed at stopping him and his family from enjoying the fruits of his inheritance. This is an abuse of the human right to privacy in a family home, and goes directly against one of the objectives of The Strickland Foundation to uphold human rights. The mediation was originally set up to find a way forward in the three major issues in dispute. Since no resolution could be found to the three issues, collectively, it was quickly reduced to a single issue. This was to find a way to finally enable, after years, for the family to live peacefully in their own home (during Robert's lifetime). But the Foundation could not even agree to this simple request.

In Robert's opinion, this abject failure was due to The Council of The Strickland Foundation's collective arrogance, whereby they were attempting to impose completely unrelated and impossible conditions on Mabel's heir in return for guaranteeing a family's right to privacy in a home which, in law, already belonged to Robert. Naturally Robert and his Strickland family were very disappointed that common sense could not prevail within the Council of The Strickland Foundation where, simply relocating the seat of the Foundation, away from the Villa would enable to the family to live in peace. Instead they chose to actively compete with him for occupation, even though they had finally acknowledged, in Court, that Robert, only, has the sole right of use and habitation at the Villa. This relocation could so easily have resolved the issue on a matter so fundamental as human rights (which is meant to be a cornerstone of The Strickland Foundation's objectives) Interestingly the Foundation was well able to operate elsewhere during the entire period of the mediation and for long periods before and since.

So, the final proposed draft of the mediation foundered because of unacceptable clauses introduced, at the last-minute, seeking to get Robert to agree to a no publicity clause on this case and insisting on him giving up any rights to seek legal redress for any irregularities, made by the executors, in carrying out their duties. This begs the question why would the executors families or The Strickland Foundation seek, or need to impose such clauses in a settlement?

A judgement was delivered in January 2018 which granted most of the family collections, valuables and heirlooms to Robert, and censured the Foundation and the original executors for human rights abuses against the Strickland family, but was unclear in other aspects.  Both sides have appealed the judgement and we expect the appeal to be heard within a few years.

The 2010 transfer was done by stealth, entirely without the knowledge or consent of the heir, and no valid instrument of transfer has yet been provided. The irregular transfer was also registered just two weeks after Robert filed the FIRST court case, yet a full 22 years after the shares were supposedly registered in the executors' names (on behalf of the estate) following Mabel's death, in 1988.

Furthermore, the number of shares registered as "transferred" exceeded the number provided, as a legacy to the Foundation in Mabel's will. Even more relevant - the validity of the legacy itself is in doubt. This is because, in 2010 when the transfer was alleged to have taken place, neither Maltese company law, nor the company's own Articles of Association allowed The Strickland Foundation to be a shareholder of Allied Newspapers Ltd. because it is, unquestionably a "body corporate". The Foundation was registered as a 'body corporate', with its own legal identity under the laws of Malta, (as LPF35) and Allied Newspapers Ltd Articles of Association does not permit any body corporate to be a shareholder of the private exempt company.

Surprisingly an amendment to Malta's Company law was made on this very particular point of "body corporate" in April 2013, but was disguised as a budgetary amendment by the outgoing Nationalist government and was accepted, at face value, by the incoming Labour government with no questions asked as to the real need for this amendment. The Articles of Association of Allied Newspapers Ltd, cannot be changed without the express agreement of all the shareholders. Such a change has not been made.

The SECOND CASE therefore seeks to annul this irregular transfer and return the shares to Mabel Strickland's estate. The share register, for Allied Newspapers Ltd, cannot be produced as Robert has been informed that this was "most likely destroyed in a fire" yet all the remaining Statutory Books of the company and the AGM minutes amazingly have survived, intact, although they were all normally stored together.

For the full facts, please click on the Facts Tab. 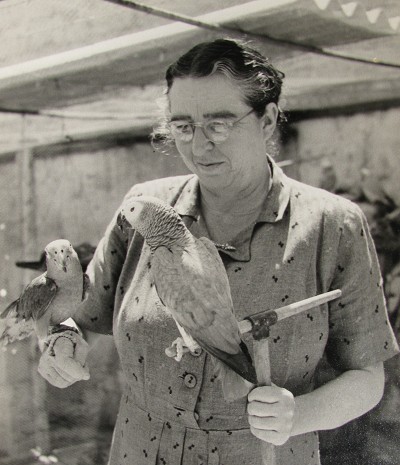 Mabel at Villa Parisio with her beloved parrot.